From the outside, Horse Racing can be a very difficult sport to understand, so we have taken an in-depth look into the Handicaps to help you know exactly what is going on.

What is a Horse Race Handicap?

In horse racing, a handicap race in which the abilities of all the runners are theoretically equalised through the weight each of them carries. This weight is decided by a handicapper, who usually works for the racing authority under which the race will be run, according to the Racing Based Handicapping System.

Why do we have handicapping in horse racing?

There are two main reasons for running handicap races. The first is to give a chance to horses with lesser ability when they take on superior animals. Whether it is through handicapping or grading (as in dog racing), the judgement of individual runners’ ability is the crucial part.

The other main reason for running handicaps is for punters. If the runners all have theoretically the same chance based on ability, the betting market will be more competitive. If Tiger Roll and Walk In The Mill both raced in the Grand National off identical marks, the former would just need to get round to win and the prices would reflect that. If he gives Walk In The Mill 20lb, their chances are much closer to even-money each of two.

What is a Handicap Rating?

In the simplest terms, it is a measure of a horse’s ability which allows it to run in any handicap. The formulation, at least in Britain, originates from the theoretical free handicap, i.e. one in which all horses run. In such a race, Frankel would carry ten stone (the highest weight generally carried on the Flat) and a 70-rated miler five stone.

As ten stones is the same as 140 pounds, the best horses are generally given marks around 140 and it works downwards from there. Over jumps, the highest figures are around 175, remembering that the highest weight carried over jumps was traditionally 12 stone seven pounds (175lb). 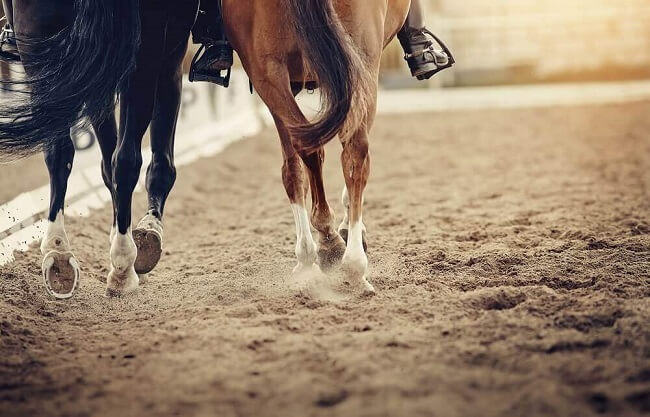 Who decides Handicap Ratings in the UK?

The BHA have a team of around a dozen handicappers, who keep ratings for all races run in the UK and others run abroad, so that e.g. Irish-trained horses can compete in British handicaps. With some exceptions (e.g. two-year-olds), handicappers specialise in terms of distance, so one handicapper will cover all races over sprint distances, one will cover races from seven to nine furlongs and so on.

How do Handicappers Decide on a Handicap Rating?

A horse generally runs three times in maiden or novice races before being allotted a rating. At this point, the handicapper will take the highest rating achieved by the horse and make that its starting mark. Maiden and novice races are the most difficult to handicap, as the abilities of the runners are less well known, so handicap debutants are more likely to be under- or over-rated.

How does a Handicap horse race work?

The two horses rated 130 will both carry 11st12lb (the highest weight in modern jumps handicaps). The horses will then carry a pound less for each point lower they are rated: so 128 will run off 11st10lb, 126 11st8lb and so on down to 10st, the weight the horse rated 104 should carry.

The minimum weight is ten stone, so while the horse rated 101 should in theory carry 9st11lb, he will carry 10st and is said to be 3lb out of the handicap.

What races can a horse run once it has a handicap rating?

Handicap ratings only allow a horse to run in handicaps. There are certain other races, but they are very much in the minority. Some classified stakes in Britain are rating-restricted, while horses need to satisfy the handicapper they are worthy of a certain rating to get into Grade 1 jumps races.

Can a Trainer appeal against a Handicap rating or refusal?

What are the situations where handicap ratings can be changed?

After every race that is run, the handicapper will reassess the horses that ran. If any ran above their rating, they will be raised accordingly. Not all horses who ran below their rating will have their rating lowered, there are many more reasons that a horse might run badly than it might run well.

Horses that have been running badly for a long time are likely to see their rating fall quickly, unless the handicapper sees any extenuating circumstances, for instance if the horse has been running under unsuitable conditions. This is why it is important that a handicapper knows the horses on his or her beat.

How are Grand National Weights decided?

Mostly using regular handicap marks. However, the BHA handicapper responsible has discretion to change those marks for the Grand National, over Aintree’s unique course. In practice, they tend to lower the topweights a little, to encourage them to run (Grand National topweights will often have the Cheltenham Gold Cup as an option), while they sometimes raise horses with lots of good form over the National fences. The aforementioned Walk In The Mill, twice the winner of the Becher Chase at Aintree, would be a good example.

What is a ‘long handicap’?

It refers to horses who are out of the weights. So the 101 rated horse discussed above would appear in the long handicap under 9st11lb.

What does ‘ahead of the handicapper’ mean?

Horses improve naturally, while the handicapper can only rate them on what they have achieved. If a horse keeps improving from race to race, the handicapper will struggle to catch up until that improvement levels off. This is most common with young horses.

What does ‘out of the handicap; mean?

What is a handicap penalty?

Handicap ratings are published weekly. A horse who wins a handicap, but whose rating has not been reassessed by the time of their next race, must carry an arbitrary penalty, normally of 6 or 7lb. Horses have been known to win two or three times before reassessment is carried out.

Who is the best horse racing handicapper?

Private handicappers are not bound by some of the same considerations as ‘official’ (e.g. BHA) handicappers and will generally produce better ratings. Timeform have a long-standing reputation for reliable ratings, as do the Racing Post.

What does RPR mean in horse racing?