Horse Racing Length – How long is a horse race in the UK?

Horse racing lengths vary from just a couple of furlongs to several hundred miles, if you count the Mongol Derby. In Britain, horse racing rules state that races should be over a minimum of five furlongs, while the longest race is over 4m2½f. That is still the Grand National, although these days it is only around 50 yards longer than the Midlands Grand National.

What is a furlong?

A furlong is simply an eighth of a mile. As a mile is 1760 yards, a furlong is 220 yards. While in Britain, e.g. road signs are still in miles, furlongs have fallen out of favour, replaced by fractions of a mile (horse racing in America uses this format, so there 1m1f is termed ‘a mile and an eighth’).

A furlong translates quite closely as 200 metres (it’s strictly 201.17m), so in countries using metric measurements races are generally defined in units of 200m.

Horse racing lengths to seconds: How long is a horse race in terms of time?

Naturally, that depends. A five-furlong race is often over within one minute and decent sprinters will generally run a furlong in under 12 seconds once they are up to speed. Steeplechases over four miles or further can take up to ten minutes.

The Racing Post standard time for the Grand National works out at around 15.8 seconds per furlong. This is to be expected, as human marathon runners are expected to run slower than 400m runners.

The horse racing average time is therefore impossible to pin down. The Racing Post have standard times (the time a good horse could expect to run at an even pace) for all courses and distances in Britain. These are the industry standard for calculating average times. 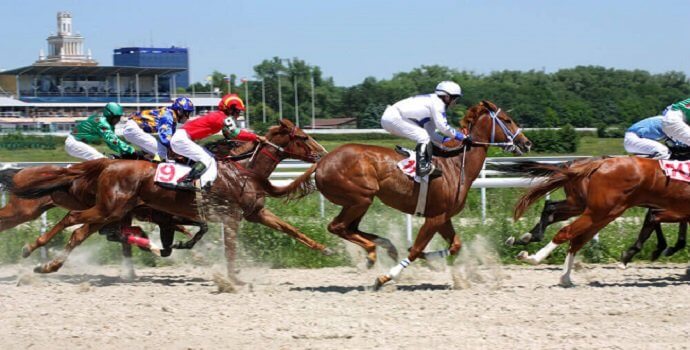 How long is a horse racing track?

Again, this varies and the variety depends on the country. US tracks are reliably flat, left-handed and a mile or slightly more in circumference. Britain and Ireland have a much greater variety. Chester is not quite a mile around, while a circuit of Pontefract is more than two miles.

These differences come from racing’s historic standing. Chester was built on common land, Perth was within the grounds of Scone Palace, Musselburgh was built on the town’s links land. Course length and configuration was dictated by the land on which they had to be built. In places like the US, land was often specifically selected for horse racing.

It used to be the case that for jumps races tracks needed to publish the distance of races that were accurate only to the nearest half furlong (110yds). It was found this led to some significant errors over time: Wetherby were running their feature Charlie Hall Chase over about two and a half furlongs (550yds) short of the advertised distance.

Now all tracks publish accurate distances and must tell the British Horseracing Authority if races are being run over a different distance, even by a yard.

Horse racing rules state that Flat races can be from five furlongs and do not have a widely-published maximum, but in practice there are few races beyond two miles. The longest race held on the Flat in Britain under rules is the Queen Alexandra Stakes at Royal Ascot, over 2m5f143yds.

The minimum for races run over obstacles (hurdles or chases) is 1m7f (formerly 2m) and, again, there is no maximum in the rules but the longest races go slightly beyond 4m2f. Bumpers (otherwise known as National Hunt Flat races) are sometimes over shorter, as short as 1m4f in some cases.

How long is a horse race time?

It goes from a minute to ten minutes, depending on the length of the race. The best way to find out an average for a certain race is to refer to Racing Post standard times.

How many laps is a horse race?

This again depends on both distance, and track configuration. A three-mile race would take three laps of Fakenham, but only two of Cheltenham.

How many minutes does a horse race last?

No horse race will last more than ten minutes. Most Flat races are over in three minutes or less. Jumps races start at around three and a half minutes and most take less than seven minutes.

How many horse races are there in a day?

Again, this depends on the time of year. In Britain, there can be as few as 12 races scheduled on a day in winter. In summer, when there are fixtures in the evening as well as the afternoon, there can be more than 40. Typically, there will be 18-20 races a day during winter and somewhere in the mid-30s during summer.

How much time does a racehorse run in its lifetime?

A sprinter who stays injury free can expect to run up to 100 times, at about a minute a time. A bombproof staying chaser will run a lot more than that in pure time terms. Kauto Star ran 41 times in his career and would thus have spent around four hours (240 minutes) on the track.