A plethora of Japanese horse racing fixtures is scheduled each year, resulting in over 21,000 races, for the extremely passionate and knowledgeable fanbase. These races are a mixture of Flat, jumps and Ban’ei (draft racing).

Horse racing is organised by the Japanese Racing Association, which manages the ten main tracks, and the National Association of Racing. If you plan to place a bet on horse races, do not hesitate to read our page dedicated to horse racing tips.

Japanese virtual horse racing is also very popular and interesting, with the animated game ‘Japan World Cup 3’ providing entertainment for racing fans while real life action is not on offer. 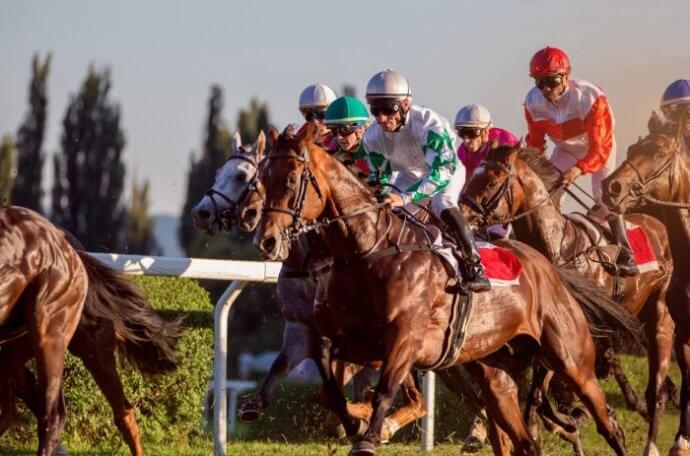 One of, if not the most prestigious horse races in Japan. The Japan Cup is contested on the last Sunday in November at Tokyo racecourse over a mile and a half (2,400 metres). One of the richest races in the world, worth $5.8million, the Japan Cup is an invitational event and has produced some of the most memorable finishes in racing history.

Formerly called the Japan Cup Dirt, the Champions Cup is contested by three-year-olds in early December each year over a distance of nine furlongs (1,800m). Run at Chukyo racecourse, it often follows the Japan Cup in the race programme and has been won by the likes of Ryan Moore and Frankie Dettori since the inaugural running in 2000.

A race that is held twice a year – spring and autumn – both of which are Grade 1s. The Spring Tenno Sho, held at Kyoto, is the longest Grade 1 on the calendar as it is run over 3,200m and is famous for being won by super horse Deep Impact. The Autumn version, held at Tokyo over 2,000m, is the first leg of the Autumn Triple Crown.

A Grade 1 over six furlongs for four-year-olds and older. The inaugural running of the Takamatsunomiya Kinen with these conditions was in 1996 and it has been open to horses trained outside of Japan since 2001. It is the only JRA race not run at their four major racetracks.

The final leg of the Japanese Autumn Triple Crown, the Arima Kinen is a Grade 1 contest run over 2,500m for three-year-olds and up. The majority (ten) of the 16-runner field are voted to compete by fans, while the other six places are filled with international runners.

This track was built in 1933 and is considered the best racetrack in Japan. It underwent significant renovation work at the start of the century and is one of the most picturesque oval venues in Japan. Tokyo hosts eight Grade 1 contests and you need a classy horse to win there.

A featured track in the capital city, Nakayama was built in 1920 and hosts five Grade 1s. It is a bigger track with an outer and inner loop. Nakayama also hosts jump racing with the feature Nakayama Grand-Prix drawing big crowds.

The premier racecourse in western Japan, Kyoto, built in 1924, holds the same number of fixtures as the other major racecourses per year – five meetings that are run over six to 12 days. The Spring Tenno Sho is the feature race.

The last of the big four tracks, Hanshin is situated close to Kyoto and has the same amount of fixtures. One of the newer tracks (built in 1949), Hanshin also hosts five Grade 1 contests and is known for its wide outer loop.

Japanese racing is similar to Australian, with the pace of each individual race proving crucial. Star riders Yutake Take and Keita Tosaki ply their trade at the Japanese Racing Association tracks, while British jockey Oisin Murphy has proved extremely successful when riding there in the winter.

Riders in Japan have to have come through a recognised horse racing school, while foreign raiders who made their debut out of Japan can’t race in the country except for running in specific races open to international horses.

How to bet on Japanese racing in Australia

Not many firms offer Japanese horse racing betting or Japanese Horse Racing Cards. bet365 tend to provide the best service, though visible form is thin on the ground.

One of the biggest booming industries in the country is horse racing betting. Horse racing is just one of four sports you can bet on in Japan and the industry is on a marked upward curve. Punters select win (to finish first), place (first or second) or show (first, second or third) and their stake goes into the pools, which calculates the Japan racing live odds.

Japanese horse racing data isn’t easy to find so you might have to spend a fair while on Google!

How to watch Japanese Horse Racing from Australia

Twitter can be a good place to find a Japan Horse racing live stream.

Is horse racing popular in Japan?

Horse racing is a booming sport in Japan thanks to the betting aspect and the fame of star racehorse and sire Deep Impact.

G1 stands for Grade 1, the top category of horse race worldwide. G1 Jockey, made in Japan, is a popular video game.

What is the Japan World Cup?

The Japan World Cup is a DVD stacked full of virtual horse races. The Japan Cup however is the biggest horse race in the country.

How do you bet on horse racing in Japan?

Placing bets on the win, place or show markets, depending on whether you think your selection will come home in front, in the first two or first three.

What is the greatest horse race in Japan?

The Japan Cup is the biggest race in the country.

How do I place a bet in Japan?

You place a bet by entering the pools.

How many racecourses are there in Japan?

There are 25 racecourses in Japan. Ten are run by the Japan Racing Association and the other 15 by the National Association of Racing.