The final list of Royal Ascot runners 2022 won’t be announced until right before the race. However, we already have some clear clues as to which horses are running at Ascot 2022.

In this article, we’ll discuss our favourites and why we believe they are the current Royal Ascot favourites. If you are planning to place a bet on the race, do not forget to check our Royal Ascot betting tips.

Which Horses Are Running at Royal Ascot 2022?

Royal Ascot has been the centrepiece of the UK racing calendar for well over a century.

In the following segment, we’ll go through some of the top Royal Ascot runners 2022. We’ll see what makes them Royal Ascot favourites and take a look at their performance so far.
You should, however, be aware that changes in the lineup can happen even on the day of the race. That is why you should use the information on Royal Ascot horses only as an indication.

If you want to watch the race, find out where to watch Royal Ascot live here. 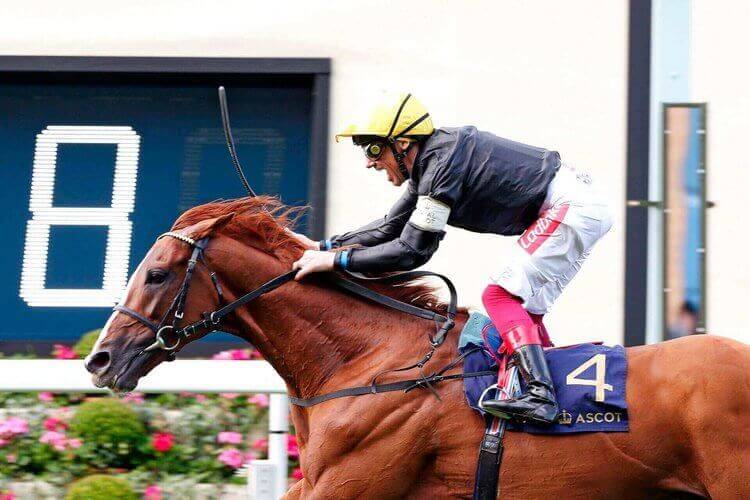 Regularly attended by the members of the British Royal Family, the event has also had the status of a major social event. It’s no wonder then that every year there is a ton of interest in Royal Ascot favourites. It’s because the event is a clash of some of the biggest names in horse racing.

Additionally, it will allow a huge number of people, to bet on Royal Ascot runners. Taking into account how monumental the event is, there will be many well-known names vying for the top spot.

As Royal Ascot 2022 draws closer we get ever nearer to knowing who will take part for certain. The main race of the week is the Gold Cup, a two-and-a-half-mile Group 1 race run on Thursday.
This is the prize they all want to win, with these five horses being the ones we consider to be among the favourites for the best-staying race of the year – the 2022 Ascot Gold Cup.

The champ is back for more. Having landed an incredible four Goodwood Cup victories, the brilliant seven-year-old son of Sea The Stars is looking to match that feat in the Gold Cup.
His third win last year was the highlight of his impeccable racing career, despite being achieved on unfavourable soft ground. The competition is definitely better this year, but having reappeared with a cosy win in the Sagaro Stakes at Ascot over two miles, he seems ready for the task.

Age: 4 / Jockey: J Fanning / Trainer: Mark Johnston
From the elder statesman to the new kid on the block. Four-year-old Subjectivist looks sure to take over wherever and whenever Stradivarius leaves off, trainer Mark Johnston hoping he can get to the top early by knocking the champ off his perch.

Subjectivist was an excellent winner of the Group 1 Prix Royal-Oak last autumn and ran away with a Group 2 event in Dubai back in March. Natural improvement would make him dangerous here.

Age: 5 / Jockey: H Doyle / Trainer: Alan King
In beating Withhold at Salisbury before taking down the British Champions Long Distance Cup last season, Trusehan announced himself as one of the best stayers around.

Since then, he has chased Japan home at Chester, is improving all the time, likes most ground conditions and has handled Ascot well in the past.

Age: 5 / Jockey: W Buick / Andrew Balding
Overlooked by many, Spanish Mission comes into this as the current Doncaster Cup and Yorkshire Cup winner. This form is very hard to ignore. Very soft ground would be a problem, so Buick and Balding will be hoping for good weather.

Age: 4 / Jockey: TBC / Andrew Balding
This is a very dangerous horse to overlook. Aidan O’Brien can call on his experience of having trained the great Yeats to a similar level of Stradivarius in years gone by. An Irish Derby winner, fourth in the St Leger and second last time to Spanish Mission, this horse could yet be on the premises.

There are eight Group 1 races at Royal Ascot each year with the entire breeding and training community pinning their hopes on this week. The central race in among all of this is the historic Gold Cup.

The Gold Cup is legendary, easily the most prestigious event of the week and the one they all want to win. There is more than just prize money at stake in this race every season.

The 2020 Gold Cup was held in front of empty grandstands on Thursday 18th June. Stradivarius was sent off the 4/5 favourite to win his third renewal in a row, only the soft ground planting doubts of the minds of punters and his trainer, John Gosden.

In the end, Strad got the job done with the minimum of fuss. Having come into the race smoothly, Frankie Dettori afforded himself some cheeky looks around with a couple of furlongs to go when he pressed the button and waited for the response underneath. That response was electric.

Despite the unfavourable going, Stradivarius and Frankie pulled an incredible 10 lengths clear of Nayef Road and 18 clear of Cross Counter back in third to record a historic win.

Here’s how they all finished in the 2020 Gold Cup:

All the Royal Ascot Results